To share your memory on the wall of Clarence Lauderback, sign in using one of the following options:

Provide comfort for the family of Clarence Lauderback with a meaningful gesture of sympathy.

To send flowers to the family or plant a tree in memory of Clarence A "Butch" Lauderback Jr., please visit our Heartfelt Sympathies Store.

There are no events scheduled. You can still show your support by sending flowers directly to the family, or planting a memorial tree in memory of Clarence A "Butch" Lauderback Jr..
Visit the Heartfelt Sympathies Store

We encourage you to share your most beloved memories of Clarence here, so that the family and other loved ones can always see it. You can upload cherished photographs, or share your favorite stories, and can even comment on those shared by others.

Posted Sep 26, 2019 at 12:53pm
My condolences to the entire Lauderback family. What a great guy Butch was. Always a smile...a joke...quick wit. Such a great true friend of my dad's through life, work, golf, softball and umpiring. May many found memories bring you peace.
Nancy La Pierre Beaumont
Comment Share
Share via:
B

Posted Sep 23, 2019 at 08:59am
Compared to others, I only knew Butch for a very short time through the NEUA. However, I did have the honor to work with Butch while serving on the board. And it was definitely an honor to work a high school softball game with him before he retired. Butch was fair and a good leader and umpire. He had given a lot for others to learn. I GOT IT!
Comment Share
Share via:
JH

Posted Sep 22, 2019 at 11:22am
Hello Barbara, Being involved with the Northeast Umpires Association for a little over 25 years and being the Associations Secretary for 15 years I got to know Butch. He helped me in many ways to become a better secretary and a better umpire. When he was the assignor for Women's Fastpitch Softball for Lake Erie College he gave me my first two games. I ended working with Butch in my first 2 games. He worked the first game behind the plate. As I was getting dressed to work the second game behind the plate he asked me why I was putting on my chest protector. He told me to take it off because I don't need it. I was scared of getting hit but you learn quickly how to properly stand to protect yourself. From that point forward I never wore a chest protector while working women's college and girls high school fastpitch games. During a local high school meeting Butch told all of us that during a confrontation with a coach/manager of a team "The less said the better." From that point on I followed that saying and it worked during future confrontations. I always will remember Butch being a good human being and friend to me. He is in my prayers. 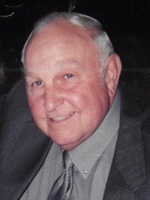