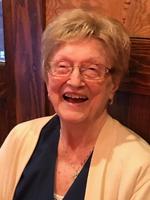 Funeral Mass for Theresa “Terry” (nee Archacki) Herczog, 89, of Mentor-on-the-Lake, will be 11 a.m. Saturday at St. John Vianney Church, 7575 Bellflower Road, Mentor.
Mrs. Herczog passed away peacefully at home Monday, Dec. 23, 2019, surrounded by her loved ones and under the care of Hospice of Western Reserve.
In addition to raising six children, Terry worked hand-in-hand with her husband Ted for over 50 years, managing Herczog Heating & A/C, until she “retired” in 2014. However, her true passion was music. A choir member since her teens, beginning at St. John’s Cathedral in downtown Cleveland, she was a very active member of St. John Vianney Church’s music ministry for almost 40 years, including choir, cantoring, and funerals. She was known by one and all for her engaging personality, comedic nature, corny jokes, and her mad skills on the kazoo. Our beloved Matriarch will be sorely missed and never forgotten by her family and countless friends.
Terry was preceded in death by her beloved husband, Ted Herczog; daughter, Terry Herczog; and was the last remaining of 13 siblings.
She is survived by four daughters, Luci Dalton, Anita Herczog (Ryann Anderson), Paula (George) Tintor, and Joanne (Dan) Mickshaw; and son, Ted (Kim). She was also the adored grandmother of 10; and beloved great-grandmother of five.
Family will receive friends from 1 to 3 and 5 to 8 p.m. Friday at McMahon-Coyne-Vitantonio Funeral Home, 6330 Center St., (Route 615, north of Route 2), in Mentor. Burial will be in Willoughby Memorial Gardens.
In lieu of flowers, memorial contributions are suggested to St. John Vianney Parish.
To leave condolences for the family, visit www.MCVfuneralhomes.com.