To share your memory on the wall of Howard Theiling, sign in using one of the following options:

Provide comfort for the family of Howard Theiling with a meaningful gesture of sympathy.

We encourage you to share your most beloved memories of Howard here, so that the family and other loved ones can always see it. You can upload cherished photographs, or share your favorite stories, and can even comment on those shared by others.

Posted Jan 11, 2020 at 11:38am
Wonderful memories of 71 years of friendship between the Theilings and the Hilderbrands. The best friendship anyone could ask for, through good times and sad times. May the Lord bring peace to Irene and all the family.
Comment Share
Share via:
SK

Posted Jan 07, 2020 at 03:17pm
May a beautiful life--well lived and fond memories comfort all who are missing Jim today. Susan PSL , Fl
Comment Share
Share via: 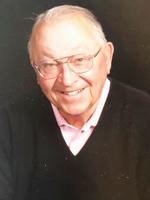