To share your memory on the wall of John Wilson, sign in using one of the following options:

Provide comfort for the family of John Wilson with a meaningful gesture of sympathy.

To send flowers to the family or plant a tree in memory of John "Jack" Wilson, please visit our Heartfelt Sympathies Store.

Provide comfort for the family with a meaningful gesture of sympathy.

The insignias listed here may be subject to copyright and / or trademarked. Those copyrights and trademarks are owned by the respective organizations.

We encourage you to share your most beloved memories of John here, so that the family and other loved ones can always see it. You can upload cherished photographs, or share your favorite stories, and can even comment on those shared by others.

Posted Mar 14, 2020 at 11:02am
Jack was one of my mentors when I took over the US Air Force Recruiting area for Lake and Geauga counties. Condolences to the family. May he rest in peace, “Once a recruiter always a recruiter”.

Thank you so much for your memory comment, yes, Jack was very proud of his time of service in the Air Force, in all phases, including his time recruiting. Hopefully he wasn't too hard on you. LOL. God bless. Candace Edmonds (Jack's niece.) 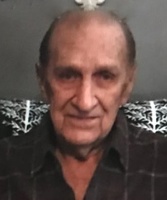